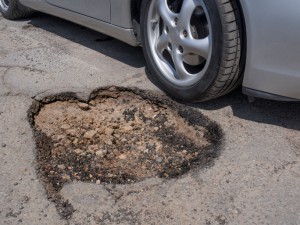 According to EZStreetAsphalt.ca, tens of thousands of tonnes of patching materials and many millions of dollars in labour are used each year to fix the potholes — only to have the same potholes open up the following winter. Overall, spring potholes cost the country millions of dollars during a two- or three-month period with the cost of pavement integrity issues caused by the thaw ranging well into the future. So far in Toronto this year, the city has already repaired more than 85,000 potholes. And the annual budget to repair potholes in Montreal averages about 2.5 million dollars. 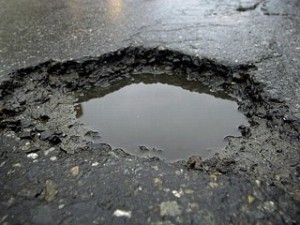 Where are the Worst Roads?

Each year, the Canadian Automobile Association (CAA) calls on road users throughout the province to raise awareness about the need for improved infrastructure by voting for Ontario’s worst road.

The auto club says Toronto’s Dufferin Street has made the list at least seven times over the years, not far behind Steeles Avenue, also in Toronto, which has previously earned eight spots on the list. Voting for the worst roads of 2014 is still being tallied; however half the roads on last year’s list were from the Greater Toronto and Hamilton Area, after the CAA counted more than 10,000 votes from across the province. 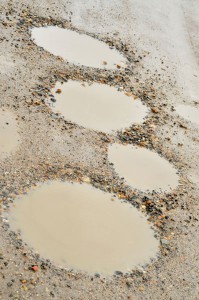 Drivers know immediately when they hit a pothole: The heart-stopping, teeth-jarring jolt is hard to mistake. However, it’s not always immediately clear if hitting the pothole caused damage to the vehicle, and to what extent.

Hitting a pothole can damage tires, wheels, steering and suspension, wheel alignment, and more. Hitting even one especially severe pothole could alter the alignment of a wheel and cause uneven tire wear. Uneven tire wear means the tire will need to be replaced sooner than necessary. That bad bump can wind up costing car owners hundreds of dollars in repairs!

The Car Care Council of Canada recommends that motorists who experience any of the following warning signs after hitting a pothole should have a professional technician at their local repair shop inspect the vehicle.

If you’ve hit a pothole and are experiencing any of these problems, come in to an Active Green + Ross Tire Repair Centre soon so we can take a look at your car and help you solve any problems the pothole may have caused.

The Car Care Council of Canada is the source of information for the “Be Car Care Aware” consumer education campaign promoting the benefits of regular vehicle care, maintenance and repair to consumers. For a copy of the council’s Car Care Guide or for more information, visit www.becarcareaware.ca.