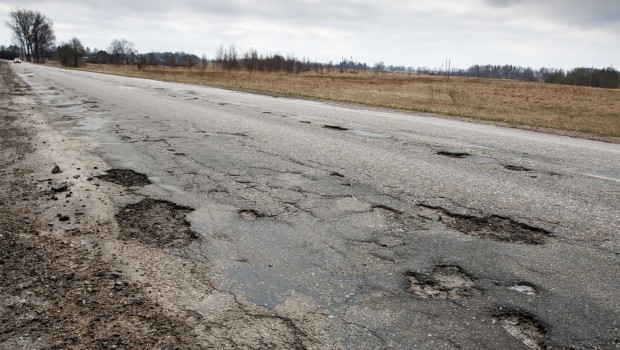 It’s that time of year: Spring season freeze and melt cycles cause our weary roads to erupt with punishing potholes. Another colder-than-average and snowy Ontario winter means additional road maintenance challenges for cities and towns across the province.

Hitting a pothole can damage tires, wheels, steering and suspension, wheel alignment, and more. Hitting even one especially severe pothole could alter the alignment of a wheel and cause uneven tire wear. Uneven tire wear means the tire will need to be replaced sooner than necessary. That bad bump can wind up costing car owners hundreds of dollars in repairs! END_OF_DOCUMENT_TOKEN_TO_BE_REPLACED

Do you know what this dashboard light means? It is your tire pressure monitoring system (TPMS) telling you that one (or more) of your tires is dangerously under inflated.

Under-inflated tires are estimated to cause thousands of car crashes and hundreds of deaths each year, yet 42 percent of drivers still can’t identify the TPMS vehicle dashboard icon, and 1 in 10 surveyed admit to having intentionally ignored a TPMS warning and continued to drive, according to survey results from Schrader International. END_OF_DOCUMENT_TOKEN_TO_BE_REPLACED

According to EZStreetAsphalt.ca, tens of thousands of tonnes of patching materials and many millions of dollars in labour are used each year to fix the potholes — only to have the same potholes open up the following winter. Overall, spring potholes cost the country millions of dollars during a two- or three-month period with the cost of pavement integrity issues caused by the thaw ranging well into the future. So far in Toronto this year, the city has already repaired more than 85,000 potholes. And the annual budget to repair potholes in Montreal averages about 2.5 million dollars. END_OF_DOCUMENT_TOKEN_TO_BE_REPLACED