When it comes to stopping our cars, the first thing most people think of are brakes, but that’s only partly correct: Brakes stop wheels. TIRES stop the car. Tires, shmires, right?

Think again: Under ordinary driving, the average commuter stops 40,000 times a year, and our tires serve us so well under the best circumstances we don’t give them much thought. But throw in some icy or snowy winter weather, or a few spring or fall rainstorms, and suddenly, we’re asking our tires to perform adequately under the worst circumstances. And when they’re worn, these conditions subtract even more from their performance potential.

Wouldn’t it be great if you could count on tires that would perform BETTER when worn, even under poor road conditions, than even new tires can under ordinary conditions?

Michelin recently invited AskPatty to be its guest at an event at its test track outside Greenville, South Carolina, where we spent the day driving a selection of new and worn tires under a variety of road conditions. We were given the opportunity to participate in several specific wet-road exercises designed to safely allow attendees to experience real-life examples of what can happen when tires lose their grip with the road.

These wet-road exercises demonstrated what happens when better, unworn tires are mounted on the front vs. the rear of the car, how well standard original-equipment tires keep a minivan on the road vs. cheap replacement tires on a performance car, and stopping distances between new and used tires.

And at the end of the day, we learned about a new type of tire being manufactured by Michelin, which, due to a new manufacturing process and unique rubber compound, actually provides drivers with exceptional levels of safety even as their tires wear down. Available at Active Green + Ross tire retail shops now,  Michelin’s new Premier All-Season (A/S) tire with EverGrip technology combines hidden grooves that emerge as the tire wears down with expanding rain grooves that widen over time to continue to evacuate water. But more about that later… 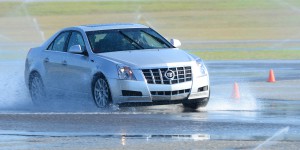 In our first evaluation, we took turns driving two similar Toyota Camrys around a wet skid pad with used tires in front and new in the rear, and then again with new in the front and used in the rear. On the first loop, with the used tires in front, I was able to feel the steering wheel begin to vibrate as the tires reached the edge of their grip on the wet road. Rushing around the wet loop at speeds faster than 50 mph, I was able to sense impending danger as the tires began to chatter, and the steering wheel began to rumble. Of course, my natural instinct to lift off the gas kept us steering safely through the wet. In the second test, however, with the new tires up front and the worn tires in the rear, there was no sensation of chatter in the steering wheel as I pushed the car around the track, until VOILA, the car broke loose, and I was spinning around and around on the wet, slippery road. While it’s a fun experience on a safe course, such performance could be a disaster on a highway with other cars and obstacles around us. The point was well made: While it’s always recommended that owners replace all four tires at the same time, if budget allows only replacing two, this test easily demonstrated why it’s best to put the two best tires in the rear.

Our next evaluation put drivers on a wet autocross course to demonstrate why it’s always best to replace worn tires with AT LEAST the original equipment installed on the car. What happens if you cheap out? Well, we took a lap in a Toyota Sienna minivan, pushing the big bulky family mover as fast as we could around sweeping turns and through quick lane-changes. Big bulky cars like this aren’t exactly known for their high-performance, because their high center of gravity tends to create some body roll that can be disconcerting — and even unsafe — at higher speeds under poor road conditions. On the other hand, people expect high levels of road handling from a performance car like a BMW 328i, but what happens when owners attempt to save money by installing lesser-performing tires? The difference was immediately apparent: After confidently piloting the minivan around the track, the BMW was much less stable at the same speeds fishtailing through the lane-change maneuvers, and skidding dangerously through the fast sweeping turns. Point made: Attempting to save money by purchasing tires that don’t offer the same performance as the originally installed tires can be a dangerous choice. 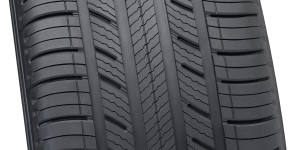 Next it was time for our introduction to new Michelin’s Premier A/S tire with revolutionary new EverGrip™ technology. “The MICHELIN Premier A/S with EverGrip is a compelling new safety technology that helps keep the driver in control and the car firmly planted on the road, says Scott Clark, chief operating officer of Michelin North America’s passenger and light truck tire division. “EverGrip continues Michelin’s industry-leading commitment to research and development of tire technology.”

First the chemistry mumbo-jumbo: these new tires feature a proprietary rubber compound with extreme amounts of silica and sunflower oil. Michelin says the silica provides the bonding strength and adherence to keep the treads on the road for high traction in wet conditions. The sunflower oil allows the tire to grip on wet roads at lower temperatures. In the end, according to Michelin, this compound promises great performance both when the tires are new and worn.

And, even more awesome are the tires’ emerging grooves: Initially hidden when the tire is new, new Michelin Premier A/S with EverGrip has another set of grooves along the tire’s shoulder that emerge as the tire becomes worn. More than 150 hidden grooves emerge to provide additional help in channeling water away and maintaining wet traction as miles are logged.

Michelin says these three elements work together to provide exceptional traction in a range of conditions year round, providing consumers with shorter stopping, hydroplaning resistance, and increased grip when new and worn.

It sounds like a lot of technical talk, but it was easy to see how these new tires performed when we tested a used set of them back to back in wet panic braking against two other cars equipped with competitive, NEW tires. 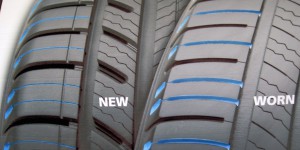 These new Michelin Premier A/S tires with EverGrip are available now at Active Green + Ross tire retail shops in 32 sizes (185/65R15 – 245/45R18) fitting a range of passenger cars including the Cadillac CTS, Ford Fusion, Nissan Altima, and Toyota Camry, among others. The tires start with a manufacturer’s suggested retail price of $156 (U.S. $) and offer a limited 60,000-mile warranty. The tires will be manufactured in North America at Michelin plants in Lexington and Greenville, S.C., Ardmore, Okla., and Pictou County and Bridgewater, Nova Scotia.

If you’re a visual person, this quick YouTube video by Mitch Butler from “The Fast Draw” explains exactly how these new Michelin tires are “Safe when new, safe when worn.” 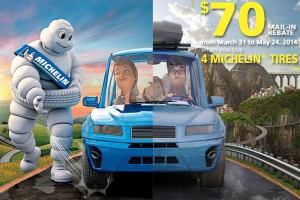 And now, for a limited amount of time, Michelin is offering a special $70 rebate when you buy four passenger or light truck tires. As part of its Spring Promotion, this $70 rebate is available on tire purchases made from March 31 to May 24, 2014, on a set of four (4) Michelin tires. Find out more at www.michelin.ca.