The following news articles feature many of the community initiatives Active Green + Ross has been involved with in the past.

Chiodo in the spotlight

Ralph Chiodo was the big cheese at last night's 28th annual Community Living Mississauga (CLM) tribute dinner. But it was his good friend Joe Falcone who bought the big cheese.

Chiodo, owner of Peel Chrysler car dealership in Mississauga and founder of more than 70 Active Green + Ross auto repair shops locations across Ontario, was in the spotlight last night as CLM hosted its annual gala fundraiser at Le Treport Wedding and Convention Centre on The Queensway.

Falcone, who sat at the head table with his good friend Chiodo, shelled out $2,000 for 40 kilograms of Parmesan during a fundraising auction in support of CLM, the charitable organization that provides support to more than 1,700 people with intellectual disabilities and their families in Mississauga.

"Ralph Chiodo is a game-changer," said Falcone, a businessman in Etobicoke. During his toast to Chiodo, Falcone cited the incredible work his friend has done raising money and awareness for good causes.

More than 400 people attended this year's gala. Proceeds will be used to pay for summer youth programs for which there is no government funding.

Chiodo said he was glad to help raise funds for CLM summer programs.

"I don't need to be honoured," he said. "But CLM does such great work in our community, I'm glad to be here."
The theme for his tribute at Le Treport was "Made in Canada — the Italian Way."

Chiodo might well reverse that description for himself. He was made in Italy, and came to Canada as a young — and poor — man in 1957. He found opportunity in Canada.

As successful as he's been in business, Chiodo makes it clear family comes first and giving back to the community is a top priority for him.

Over the years he's raised more than $1 million at Pasta Festa, for Trillium Health Centre and donated $300,000 to COSTI, an organization that helps new immigrants. He has also been a supporter of Pier One Museum in Halifax, where immigrants including him and his wife were processed upon arrival in Canada.

Chiodo has also been active on the municipal stage, helping organize the Rotary Ribfest Canada Day picnic in Centennial Park on the Etobicoke/Mississauga border, and making sure his proud heritage is celebrated at the Italian pavilion during the annual Carassauga multicultural festival.

The head table guests included Vaughn MP and Associate Minister of National Defence Julian Fantino.
A highlight of the evening was a speech delivered by Alexander De Nicolais. The 19-year-old CLM client talked about how important the organization's summer programs were to him.

"This program means a lot to me," he said, recounting how the program introduced him to zip-lining and go-karting and helped himself a summer job at a sporting goods store. His sincerity and eloquence drew a standing ovation. 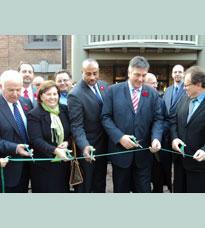 COSTI’s newly renovated downtown building will now be known as The Ralph Chiodo Family Immigrant Reception Centre. The edifice at 100 Lippincott Street was built 90 years ago, and for the past 22 years has offered temporary shelter to over 15,000 refugees. The building is being re-named today after the well-known Calabrian entrepreneur, Ralph Chiodo, president of Active Green & Ross and head of Peel Chrysler Fiat, who donated $300,000 towards renovations. The project, costing $3 million, was completed thanks to contributions by the federal and provincial governments, each donating $1 million to COSTI. The remaining $1 million comes from fundraising by several entities in the private sector such as Fausto Gaudio’s Banca Italiana IC Savings.

130 people gathered in front of the historic building for the ribbon cutting. Also present were Don Meredith, and Charles Souse, the Ontario Minister of Citizenship and Immigration.

“This is a big day for us. We’ve been waiting many years to renovate the centre which has been in operation for 22 years,” affirms Mario Calla, executive director of COSTI. “It was in bad condition recently. The federal and provincial governments came to the rescue, as well as, obviously, the great contribution by Ralph Chiodo and his family, and the support of IC Savings. Today it’s a safe and comfortable centre for refugees who come to us directly from the airport. It’s their first home, so we want it to be the best possible.”

The structure offers a fundamental service for those arriving to Canada with refugee status.

“This structure has 42 bedrooms and can accommodate 100 persons,” comments Yasmine Dossal, social services director for COSTI. “Refugees remain here about 10 to 15 days, we help find them a stable arrangement, as well as offer them food and assistance. We receive about 850 people a year. It took us about a year to renovate the building. We’re happy and proud of these accommodations. Anyone coming here has the right to get the best assistance possible.”

Chiodo is involved almost full time in the social services sector – with Pasta Festa for example, a charity event he organizes annually that has raised over one million dollars for the Trillium Health Centre in Mississauga over seven years. The Calabrian entrepreneur explains the reason for his contribution to COSTI.

“The Honourable Frank Iacobucci (former Supreme Court judge, and member of COSTI’s administrative council) asked me to make a donation for this important building, and I couldn’t come short. COSTI represents immigrants and I’m an immigrant. Years ago I found myself having to go to school to obtain a work permit and COSTI was ready to help me. Then, I didn’t need to do that course, but either way I’m still grateful.”

As of today, the Reception Centre is named after him – a name that will forever remain in the community’s history.

“I received much in my life, and this is the right opportunity to give back a bit of my fortune to the community,” Chiodo continues. “There are many generous people in this magnificent country who deserve it. I left Italy with an empty cardboard suitcase, then I had some good luck and now the moment has come to pay back.” Chiodo admits to having gained much satisfaction from his life related to social services, and COSTI is one of these. “I had the fortune of being part of the organization of Pier 21, which has become a national museum. Then came COSTI, which gives me great pleasure, and I hope to be able to continue to help these people.”

Active Green+Ross is a proud supporter of the Etobicoke Lakeshore Santa Claus Parade. 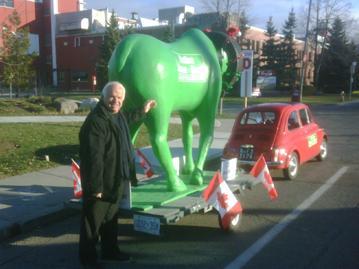 The Etobicoke Chamber of Commerce is pleased to announce the selection of Mr. Ralph Chiodo as the Etobicoke Chamber of Commerce Business Person of the Year for 2004. Ralph is a man with drive. At the age of 23 he owned and operated his first automotive service centre. Today Ralph owns the Active Green + Ross Tire & Automotive Centres, as well as Peel Chrysler Jeep Dodge and his own construction company.

Ralph also is an active member of the Rotary Club of Etobicoke, a member of the board for the Trillium Health Centres, and works with the South Etobicoke Regeneration Project, the Holy Angels Recreation Association, and other local charities.