About a Tire's Speed Rating 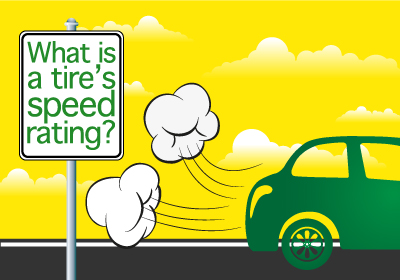 The speed rating of a tire indicates the speed category (or maximum range of speed) at which the tire can carry a load under specified service conditions. It also is used to provide the expected steering response engineered into the vehicle by the manufacturer.

If the replacement tires are different in speed rating than the OE tires then the maximum speed capability of the vehicle is limited to the lower speed rated tires, and the handling characteristics of the vehicle will be compromised, at all speeds.

Note: If the OE recommended speed rating is not followed, it can often times lead to accelerated or abnormal tire wear.

The History of Speed Ratings?

We can thank Germany's famous Autobahn for tire speed ratings.

Tire speed ratings range from A (the lowest) to Y (the highest). But the chart is not completely in alphabetical order.

For example, H is between U and V, with the common perception that H stood for "high performance" at one time.

As manufacturers continue to add speed to their vehicles, tire speed ratings evolve to match the speeds.

For example, Z was the highest rated speed at 240 kph+ until W & Y were used to match the higher speeds of exotic sports cars.

Typically, the higher the speed rating, the better the grip and stopping power, but the lower the tread life.

You can always increase the speed rating of the tires on your vehicle for improved performance, but can never decrease it without reducing the vehicle top speed to that of the lower speed rating selected.

If tires of different speed ratings are mounted on a vehicle, the lower speed-rated tires should be placed on the front axle regardless of which axle is driven.

This is to prevent a potential oversteer condition. Vehicle handling may be affected, and the vehicle’s speed capacity is now limited to the lowest speed-rated tire.

For best performance, it is recommended that the same size and type of tire be used on all four wheel positions.